For those of you who don't know, my dad experienced a heart attack last Thursday afternoon.  He had lower chest pain and decided he should get it checked out.  Surprisingly (well probably not a surprise to anyone who knows his stubborn, I mean independent nature), he drove himself to the hospital.  He said he was quite surprised how quickly the Hospital staff began working on him, slapping stickies on, tossing meds in, and attaching monitors.   A blood test later that evening revealed that he has suffered a minor heart attack.  He remained in the hospital under observation for what seemed like an eternity.

By Monday the doctor had booked him in for an angiogram.  He was given a one way ticket via the Hospital Chariot (a.k.a. Ambulance) to Edmonton.   Luckily enough, the angiogram revealed that there were no blockages and he was able to catch the same Chariot home.  He remained in the Hospital again under observation to ensure there were no complications from the angiogram procedure.  He called me this afternoon to advise that he had passed the doctors test and was headed home ~ clicking his heels!

Papa has the BIGGEST heart in the whole wide world and we are so happy that this past week has a happy ending.  Times like these, we are reminded of the importance of family, friends and our own priorities in life.
Welcome home Papa, welcome home!! 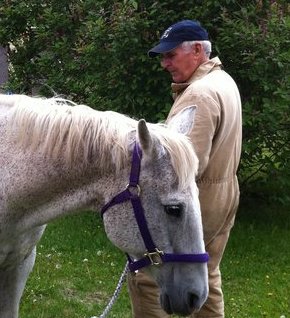 ﻿
"Things don't go wrong and break your heart so you can become bitter and give up.  They happen to break down and build you up so you can be all that you were intended to be." ~ Charles Jones
Posted by Laura Davey at 3:16 PM No comments:

Laura Davey
I believe . . . in the power of dreams! In the words of Zoe Keplowitz, "Either we have our dreams or we live our dreams".